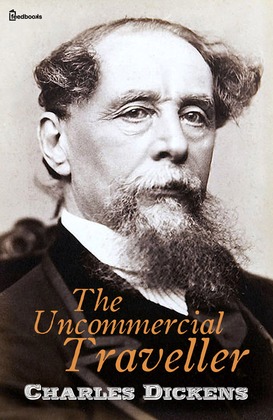 The Uncommercial Traveller is a collection of literary sketches and reminiscences written by Charles Dickens.

In 1859 Dickens founded a new journal called All the Year Round and the Uncommercial Traveller articles would be among his main contributions. He seems to have chosen the title and persona of the Uncommercial Traveller as a result of a speech he gave on the 22 December 1859 to the Commercial Travellers' School London in his role as honorary chairman and treasurer. The persona sits well with a writer who liked to travel, not only as a tourist, but also to research and report what he found; visiting Europe, America and giving book readings throughout Britain.

Dickens began by writing seventeen episodes, which were printed in All the Year Round between 28 January and 13 October 1860 and these were published in a single edition in 1861. He sporadically produced eleven more articles between 1863-65 and an expanded edition of the work was printed in 1866. Once more he returned to the persona with some more sketches written 1868-69 and a complete set of these articles was published posthumously in 1875.