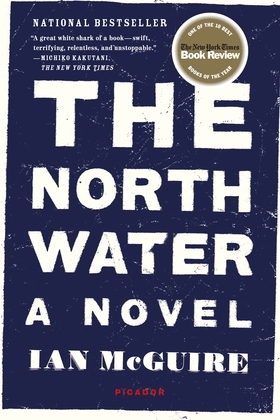 Now an AMC+ original miniseries event starring Colin Farrell and Jack O'Connell! A nineteenth-century whaling ship sets sail for the Arctic with a killer aboard in this dark, sharp, and highly original tale that grips like a thriller

One of The New York Times Book Review's 10 Best Books of the Year, and named a Best Book of the Year by The Chicago Tribune, The Wall Street Journal, The Guardian, The New Statesman, Publishers Weekly, and The Chicago Public Library

Behold the man: stinking, drunk, and brutal. Henry Drax is a harpooner on the Volunteer, a Yorkshire whaler bound for the rich hunting waters of the arctic circle. Also aboard for the first time is Patrick Sumner, an ex-army surgeon with a shattered reputation, no money, and no better option than to sail as the ship's medic on this violent, filthy, and ill-fated voyage.

In India, during the Siege of Delhi, Sumner thought he had experienced the depths to which man can stoop. He had hoped to find temporary respite on the Volunteer, but rest proves impossible with Drax on board. The discovery of something evil in the hold rouses Sumner to action. And as the confrontation between the two men plays out amid the freezing darkness of an arctic winter, the fateful question arises: who will survive until spring?

With savage, unstoppable momentum and the blackest wit, Ian McGuire's The North Water weaves a superlative story of humanity under the most extreme conditions.

Longlisted for the Man Booker Prize

Winner of the RSL Encore Award