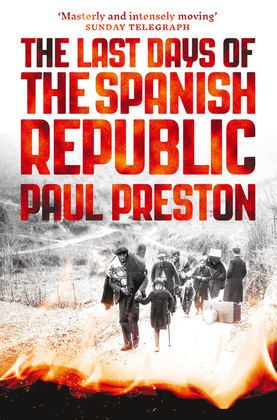 The Last Days of the Spanish Republic

by Paul Preston (Author)
Excerpt
Nonfiction History History by country Europe Spain  1945-1989
warning_amber
One or more licenses for this book have been acquired by your organisation details
EPUB
26 loans, One at a time
Details

Told for the first time in English, Paul Preston’s new book tells the story of a preventable tragedy that cost many thousands of lives and ruined tens of thousands more at the end of the Spanish Civil War.

This is the story of an avoidable humanitarian tragedy that cost many thousands of lives and ruined tens of thousands more.

On 5 March 1939, the eternally malcontent Colonel Segismundo Casado launched a military coup against the government of Juan Negrín. To fulfil his ambition to go down in history as the man who ended the Spanish Civil War, he claimed that Negrín was the puppet of Moscow and that a coup was imminent to establish a Communist dictatorship. Instead his action ensured the Republic ended in catastrophe and shame.

Paul Preston, the leading historian of twentieth-century Spain, tells this shocking story for the first time in English. It is a harrowing tale of how the flawed decisions of politicans can lead to tragedy.