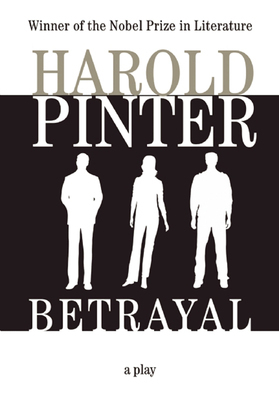 by Harold Pinter (Author)
Excerpt
Fiction Drama
warning_amber
One or more licenses for this book have been acquired by your organisation details
EPUB
Unlimited loans, One at a time
Details
“One of the most essential artists produced by the twentieth century. Pinter’s work gets under our skin more than that of any living playwright.” —New York Times

Upon its premiere at the National Theatre, Betrayal was immediately recognized as a masterpiece. It won the Olivier Award for best new play, and has since been performed all around the world and made into an Academy Award-nominated film starring Jeremy Irons, Ben Kingsley, and Patricia Hodge. Betrayal begins with a meeting between adulterous lovers, Emma and Jerry, two years after their affair has ended. During the nine scenes of the play, we move back in time through the stages of their affair, ending in the house of Emma and her husband Robert, Jerry’s best friend.

“[Betrayal] deals with the shifting balance of power in triangular relationships, and with the pain of loss. . . . Pinter probes the corrosive nature of betrayal . . . a world where pain and loss are explored with poetic precision.” —Guardian

“Betrayal is an exquisite play, brilliantly simple in form and courageous in its search for a poetry that turns banality into a melancholy beauty.” —Newsweek

“There is hardly a line into which desire, pain, alarm, sorrow, rage or some kind of blend of feelings has not been compressed, like volatile gas in a cylinder less stable than it looks . . . The play's subject is not sex, not even adultery, but the politics of betrayal and the damage it inflicts on all involved.” —Times (UK)
Publication date
January 07, 2014
Publisher
Grove Press
Page count
144
ISBN
9780802192288
Paper ISBN
9780802130808
The publisher has not provided information about accessibility.
2226548
item