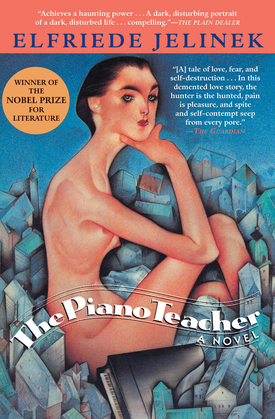 A Novel
by Elfriede Jelinek (Author), Joachim Neugroschel (Translator)
Excerpt
Fiction Literary
warning_amber
One or more licenses for this book have been acquired by your organisation details
EPUB
Unlimited loans, One at a time
Details

From the Nobel Prize-winning Austrian author: a “brilliant, uncompromising” novel that “gets behind the cream-puff prettiness of Vienna” (Publishers Weekly).

In The Piano Teacher, Elfride Jelinek creates a shocking portrait of a talented, capable woman fashioned by society into a ticking bomb. Set in 1980s Vienna, it describes a culture rotting under the weight of its oppressive, outmoded ideals—a place mirrored by the heroine’s own repressed dreams.

Erika Kohut, piano teacher at the prestigious Vienna Conservatory, is a quiet woman devoted to Bach, Beethoven, and her domineering mother. Her life consists of desperate boredom, neurotic possessiveness, and hopeless dreams of a concert career whose hour has long passed. Enter Walter Klemmer—a handsome, arrogant man out to conquer Erika’s affections. Suddenly the dangerous passions roiling under her subdued exterior explode in a release of sexual perversity and long-buried violence.

Awarded the Nobel and the Heinrich Boll Prize for her outstanding contribution to German letters, Elfriede Jelinek is one of the most original and controversial writers in Austria today. The Piano Teacher was made into an acclaimed film by Michael Haneke in 2001.