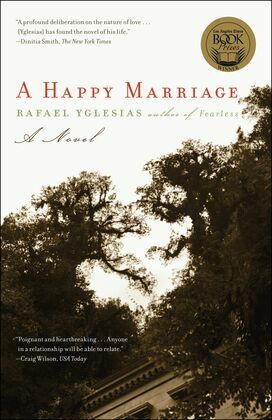 A Novel
by Rafael Yglesias (Author)
Excerpt
Fiction Literary Thrillers
warning_amber
One or more licenses for this book have been acquired by your organisation details
EPUB
Unlimited loans, 2 years, One at a time
Details

A Happy Marriage is both intimate and expansive: It is the story of Enrique Sabas and his wife, Margaret, a novel that alternates between the romantic misadventures of the first weeks of their courtship and the final months of Margaret's life as she says good-bye to her family, friends, and children -- and to Enrique. Spanning thirty years, this achingly honest story is about what it means for two people to spend a lifetime together -- and what makes a happy marriage.

Yglesias's career as a novelist began in 1970 when he wrote an autobiographical novel at sixteen, hailed by critics for its stunning and revelatory depiction of adolescence. A Happy Marriage, his first work of fiction in thirteen years, was inspired by his relationship with his wife, Margaret, who died in 2004. Bold, elegiac, and emotionally suspenseful, even though we know what happens, Yglesias's beautiful novel will break every reader's heart -- while encouraging all of us with its clear-eyed evocation of the enduring value of marriage.