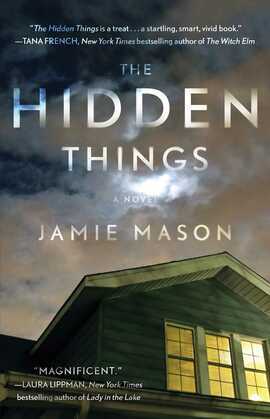 by Jamie Mason (Author)
Excerpt
Fiction Thrillers Mystery & detective Women sleuths English literature American and Canadian literature
warning_amber
One or more licenses for this book have been acquired by your organisation details
EPUB
Unlimited loans, 2 years, One at a time
Details

Inspired by the real-life unsolved theft of a 17th-century painting, this is a “smart and hugely entertainingly thriller, with so many sharp twists and hairpin turns that you’ll need to hold on for dear life” (Lou Berney, author of November Road) from the acclaimed author of Three Graves Full.

That’s all it takes for a home-security camera to capture the hidden resolve in fourteen-year-old Carly Liddell as she fends off a vicious attack just inside her own front door. The video of her heroic escape appears online and goes viral. As the view count climbs, the lives of four desperate people will be forever changed by what’s just barely visible in the corner of the shot.

Carly’s stepfather is spurred to protect his darkest secret: how a stolen painting—four hundred years old, by a master of the Dutch Golden Age—has come to hang in his suburban foyer. The art dealer, left for dead when the painting vanished, sees a chance to buy back her life. And the double-crossed enforcer renews the hunt to deliver the treasure to his billionaire patrons—even if he has to kill to succeed.

But it’s Carly herself, hailed as a hero, whose new perspective gives her the courage to uncover the truth as the secrets and lies tear her family apart.

A suspenseful and edgy mystery, “Hidden Things is a treat: a heist story taken to pieces and expertly put back together at off-kilter angles into a startling, smart, vivid book” (Tana French, New York Times bestselling author).