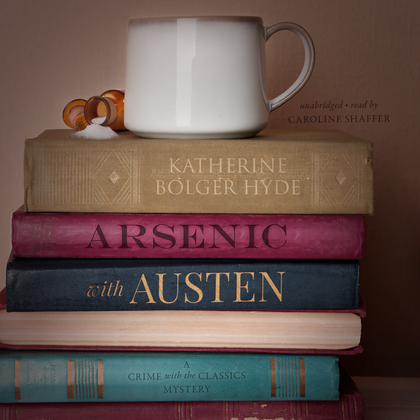 Arsenic with Austen is the first book in a delightful new cozy mystery series in which an English teacher becomes involved in murder cases that reflect elements of her favorite books.

When Emily Cavanaugh inherits a fortune from her great aunt, she expects her life to change. She doesn’t expect to embark on a murder investigation, confront the man who broke her heart thirty-five years before, and nearly lose her own life.

Emily travels to the sleepy coastal village of Stony Beach, Oregon, to claim her inheritance, centered in a beautiful Victorian estate called Windy Corner but also including a substantial portion of the real estate of the whole town. As she gets to know the town’s eccentric inhabitants—including her own once-and-possibly-future love, Sheriff Luke Richards—she learns of a covert plan to develop Stony Beach into a major resort. She also hears hints that her aunt may have been murdered. Soon another suspicious death confirms this, and before long Emily herself experiences a near-fatal accident.

Meanwhile, Emily reads Persuasion, hoping to find belated happiness with her first love as Anne Elliot did with Captain Wentworth. She notices a similarity between her not-quite-cousin Brock Runcible, heir to a smaller portion of her aunt’s property, and Mr. Elliot in Persuasion, and her suspicions of Brock crystallize. But as she and Luke continue to investigate and events speed toward a climax, Emily realizes that underneath the innocent-looking rocks of Stony Beach lurk festering jealousies that would have shocked even the worst of Jane Austen’s charming reprobates.