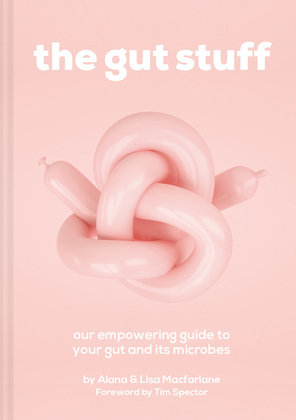 ‘We became the ‘chief guinea pigs’ for the British Gut Project where we discovered that despite us having 100% the same DNA our guts have only 40% the same microbiota… Thus our ‘gut journey’ began.’

With practical advice throughout from gut experts, this is a fact-packed, achievable guide for better health.

With a foreword by Tim Spector. Alana and Lisa Macfarlane have spent the past few years interviewing tons of gut experts: scientists, academics, chefs and foodies to get the real scoop and science behind what we eat. We now know how important the gut is to our health and wellbeing, including its impact on our immune system and on diseases such as cancer, Alzheimer’s, Parkinson’s and even mental health, but The Gut Stuff arms the reader with practical knowledge and tangible tips – both lifestyle and dietary – so they can make easy and life-changing decisions.

Chapters include: Back to School – biology and the microbiome; Mind and Body – the gut and immunity, the gut and exercise, the gut and skin, the gut-brain axis, the gut and sleep, the gut and hormones; Scientific Interlude on Pre- and Probiotics; Bullsh*t Bin – mythbusting nutrition nonsense; What Can You Do – top tips to support your gut; I've Gutta Problem – common digestive issues; The Future of Science; The Gut Glossary.

With practical advice from gut experts, from how to de-stress for your gut to the affects of alcohol on the gut, this is an achievable guide for better health.

‘Twins are a great constant for medical research and we became the ‘chief guinea pigs’ for the British Gut project where we discovered that despite us having 100% the same DNA our guts have only 40% the same microbiota, which could explain why our bodies behave so differently. Thus our ‘gut journey’ began.’