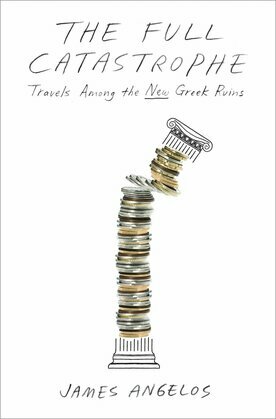 The Full Catastrophe: Travels Among the New Greek Ruins

A transporting, good-humored, and revealing account of Greece’s dire troubles, reported from the mountain villages, idyllic islands, and hardscrabble streets that define the country today

In recent years, small Greece, often associated with ancient philosophers and marble ruins, whitewashed villages and cerulean seas, has been at the center of a debt crisis that has sown economic and social ruin, spurred panic in international markets, and tested Europe’s decades-old project of forging a closer union.

In The Full Catastrophe, James Angelos makes sense of contrasting images of Greece, a nation both romanticized for its classical past and castigated for its dysfunctional present. With vivid character-driven narratives and engaging reporting that offers an immersive sense of place, he brings to life some of the causes of the country’s financial collapse, and examines the changes, some hopeful and others deeply worrisome, emerging in its aftermath. A small rebellion against tax authorities breaks out on a normally serene Aegean island. A mayor from a bucolic, northern Greek village is gunned down by the municipal treasurer. An aging, leftist hero of the Second World War fights to win compensation from Germany for the wartime occupation. A once marginal group of neo-Nazis rises to political prominence out of a ramshackle Athens neighborhood.

The Full Catastrophe goes beyond the transient coverage in the daily headlines to deliver an enduring and absorbing portrait of modern Greece.