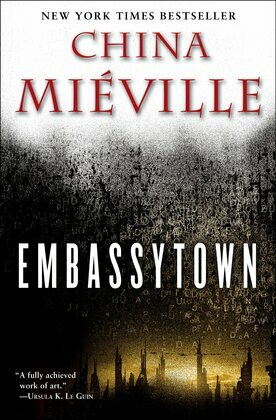 by China Miéville (Author)
Excerpt
Fiction Literary Science fiction Adventure English literature British literature
warning_amber
One or more licenses for this book have been acquired by your organisation details
EPUB
Unlimited loans, 2 years, One at a time
Details

In the far future, humans have colonized a distant planet, home to the enigmatic Ariekei, sentient beings famed for a language unique in the universe, one that only a few altered human ambassadors can speak. Avice Benner Cho, a human colonist, has returned to Embassytown after years of deep-space adventure. She cannot speak the Ariekei tongue, but she is an indelible part of it, having long ago been made a figure of speech, a living simile in their language. When distant political machinations deliver a new ambassador to Arieka, the fragile equilibrium between humans and aliens is violently upset. Catastrophe looms, and Avice is torn between competing loyalties: to a husband she no longer loves, to a system she no longer trusts, and to her place in a language she cannot speak—but which speaks through her, whether she likes it or not.

“A breakneck tale of suspense . . . disturbing and beautiful by turns. I cannot emphasize enough how terrific this novel is. It's definitely one of the best books I've read in the past year, perfectly balanced between escapism and otherworldly philosophizing.”—io9

“Embassytown is a fully achieved work of art. . . . Works on every level, providing compulsive narrative, splendid intellectual rigour and risk, moral sophistication, fine verbal fireworks and sideshows, and even the old-fashioned satisfaction of watching a protagonist become more of a person than she gave promise of being.”—Ursula K Le Guin

“The Kafkaesque writer journeys to the distant edges of the universe in his latest sci-fi thriller.”—Entertainment Weekly