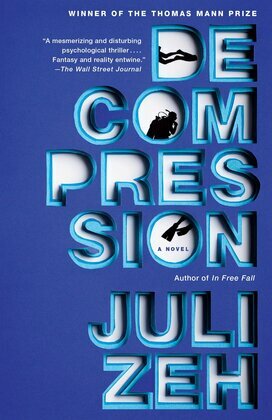 In the late 1990s, Sven Fiedler and his girlfriend, Antje, left Germany for the island of Lanzarote, rejecting what Sven considered a vulgar culture of materialism and judgment. The young couple set up a diving service catering to tourists eager to bask in the warm sunshine and explore the silent, gleaming marine paradise that makes this otherwise barren volcanic island such a remarkable retreat. Sven’s approach was simple: take the mechanics of diving seriously, instruct his clients clearly, and stay out of their personal business as best he can.

And life on the island goes smoothly until two German tourists--Jola von der Pahlen, a daytime soap star on the verge of cinematic success, and Theo Hast, a stalled novelist--engage Sven for a high-priced, intensive two-week diving experience. Staying in a guest house on Sven and Antje's property, the two visitors and their hosts quickly become embroiled in a tangle of jealousy and suspicion.

Sven is struck by Jola's beauty, her evident wealth, and her apparently volatile relationship with the much older Theo. Theo quickly leaps to the conclusion that Sven and Jola are having an affair, but, oddly, he seems to facilitate it rather than trying to intervene. Antje, looking on, grows increasingly wary of these particular clients.

As the point of view shifts from one character to the next, the reader is constantly kept guessing about who knows what, and, more important, who is telling the truth. A brutal game of delusion, temptation, and manipulation plays out, pointing toward a violent end. But a quiet one, down in the underwater world beneath the waves.