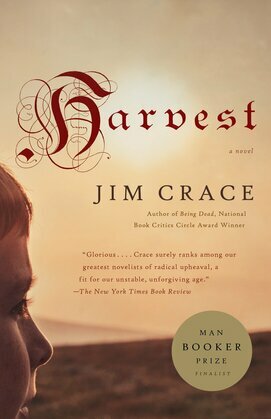 On the morning after harvest, the inhabitants of a remote English village awaken looking forward to a hard-earned day of rest and feasting at their landowner's table. But the sky is marred by two conspicuous columns of smoke, replacing pleasurable anticipation with alarm and suspicion.

One smoke column is the result of an overnight fire that has damaged the master's outbuildings. The second column rises from the wooded edge of the village, sent up by newcomers to announce their presence. In the minds of the wary villagers a mere coincidence of events appears to be unlikely, with violent confrontation looming as the unavoidable outcome. Meanwhile, another newcomer has recently been spotted taking careful notes and making drawings of the land. It is his presence more than any other that will threaten the village's entire way of life.

In effortless and tender prose, Jim Crace details the unraveling of a pastoral idyll in the wake of economic progress. His tale is timeless and unsettling, framed by a beautifully evoked world that will linger in your memory long after you finish reading.