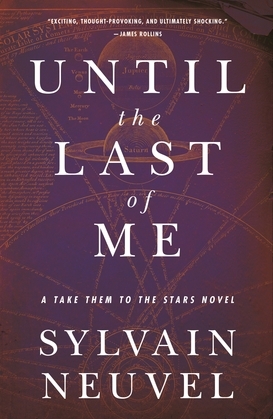 Until the Last of Me

Take Them To the Stars #2
by Sylvain Neuvel (Author)
Excerpt
Fiction Science fiction Adventure English literature American and Canadian literature
warning_amber
One or more licenses for this book have been acquired by your organisation details
EPUB
Unlimited loans, 2 years, One at a time
Details

“[A] riveting blend of historical thriller and scientific speculation, which never loses its core of humanity.”—James Rollins, #1 New York Times bestselling author, on A History of What Comes Next

Sylvain Neuvel's Until the Last of Me presents a darkly satirical thriller, as seen through the eyes of the women who sacrifice all to make progress possible and the men who are determined to stop them.

The First Rule is the most important: Always run, never fight.

For generations, Mia’s family has shaped human history to push them to the stars.

The year is 1968 and she is on the cusp of destiny, poised to launch the first humans into space.

But she cannot take them to the stars, not quite yet. Her adversary is at her heels, the future of the planet at stake, and obeying the First Rule is no longer an option.

For the first time in one-hundred generations, Mia’s family will have to choose to stand their ground, risking not only their bloodline, but the future of the human race.

Always run, never fight.
Preserve the knowledge.
Survive at all cost.
Take them to the stars.

Take Them to the Stars series
1. A History of What Comes Next