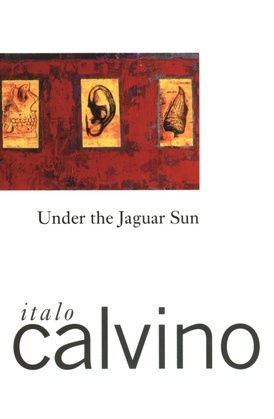 Under The Jaguar Sun

by Italo Calvino (Author)
Read sample online Download sample
Fiction
warning_amber
One or more licenses for this book have been acquired by your organisation details
EPUB
26 loans, One at a time
Details

“The thought . . . called up the flavors of an elaborate and bold cuisine, bent on making the flavors’ highest notes vibrate, juxtaposing them in modulations, in chords, and especially in dissonances that would assert themselves as an incomparable experience.” — From Under the Jaguar Sun

These intoxicating stories delve down to the core of our senses of taste, hearing, and smell. Amid the flavors of Mexico’s fiery chiles and spices, a couple on holiday discovers dark truths about the maturing of desire in the title story, “Under the Jaguar Sun.” In “A King Listens,” a gripping portrait of a frenzied mind, the menacing echoes in a huge palace spur a tyrant’s thoughts to the heights of paranoid intensity. “The Name, the Nose” drives to a startling conclusion as men across time and space pursue the women whose aromas have enchanted them. Mordant and deliciously offbeat, this trio of tales is a treat from a master of short fiction.