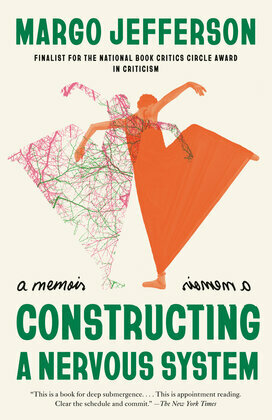 From "one of our most nuanced thinkers on the intersections of race, class, and feminism (Cathy Park Hong, New York Times bestselling author of Minor Feelings) comes a memoir "as electric as the title suggests" (Maggie Nelson, author of On Freedom).

The Pulitzer Prize-winning critic and memoirist Margo Jefferson has lived in the thrall of a cast of others—her parents and maternal grandmother, jazz luminaries, writers, artists, athletes, and stars. These are the figures who thrill and trouble her, and who have made up her sense of self as a person and as a writer. In her much-anticipated follow-up to Negroland, Jefferson brings these figures to life in a memoir of stunning originality, a performance of the elements that comprise and occupy the mind of one of our foremost critics.

In Constructing a Nervous System, Jefferson shatters her self into pieces and recombines them into a new and vital apparatus on the page, fusing the criticism that she is known for, fragments of the family members she grieves for, and signal moments from her life, as well as the words of those who have peopled her past and accompanied her in her solitude, dramatized here like never before. Bing Crosby and Ike Turner are among the author’s alter egos. The sounds of a jazz LP emerge as the intimate and instructive sounds of a parent’s voice. W. E. B. Du Bois and George Eliot meet illicitly. The muscles and movements of a ballerina are spliced with those of an Olympic runner, becoming a template for what a black female body can be.

The result is a wildly innovative work of depth and stirring beauty. It is defined by fractures and dissonance, longing and ecstasy, and a persistent searching. Jefferson interrogates her own self as well as the act of writing memoir, and probes the fissures at the center of American cultural life.