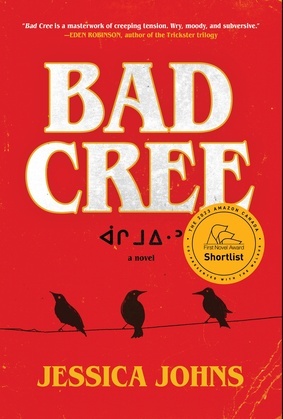 A Novel
by Jessica Johns (Author)
Read sample online Download sample
Fiction Horror English literature American and Canadian literature
warning_amber
One or more licenses for this book have been acquired by your organisation details
EPUB
26 loans, One at a time
Details

A haunting debut novel where dreams, family and spirits collide

Mackenzie, a Cree millennial, wakes up in her one-bedroom Vancouver apartment clutching a pine bough she had been holding in her dream just moments earlier. When she blinks, it disappears. But she can still smell the sharp pine scent in the air, the nearest pine tree a thousand kilometres away in the far reaches of Treaty 8.

Mackenzie continues to accidentally bring back items from her dreams, dreams that are eerily similar to real memories of her older sister and Kokum before their untimely deaths. As Mackenzie’s life spirals into a living nightmare—crows are following her around and she’s getting texts from her dead sister on the other side—it becomes clear that these dreams have terrifying, real-life consequences. Desperate for help, Mackenzie returns to her mother, sister, cousin, and aunties in her small Alberta hometown. Together, they try to uncover what is haunting Mackenzie before something irrevocable happens to anyone else around her.

Haunting, fierce, an ode to female relations and the strength found in kinship, Bad Cree is a gripping, arresting debut by an unforgettable voice.