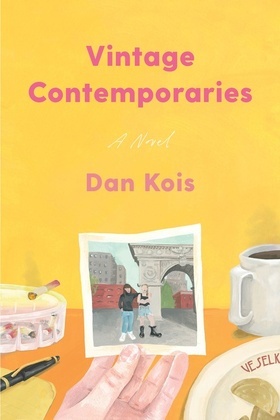 A Novel
by Dan Kois (Author)
Read sample online Download sample
Fiction Literary English literature American and Canadian literature
warning_amber
One or more licenses for this book have been acquired by your organisation details
EPUB
26 loans, One at a time
Details

“Vintage Contemporaries is about being young and becoming less young, exploring friendship (sometimes magical, sometimes messy), parenthood (ditto), and how to reconcile youthful ambition and ideals with real life. It’s a warm and big-hearted coming of age story that made me wistful for my own twenties, set in a vividly rendered and long-vanished New York City.”—Rumaan Alam, New York Times bestselling author of Leave the World Behind

Slate editor Dan Kois makes his fiction debut with this stunning coming-of-age novel set in New York City, about the joys of unexpected life-altering friendships, the power of finding ourselves in the moment, and the importance of forgiving ourselves when we inevitably mess everything up.

It’s 1991. Em moved to New York City for excitement and possibility, but the big city isn’t quite what she thought it would be. Working as a literary agent’s assistant, she’s down to her last nineteen dollars but has made two close friends: Emily, a firebrand theater director living in a Lower East Side squat, and Lucy, a middle-aged novelist and single mom. Em’s life revolves around these two wildly different women and their vividly disparate yet equally assured views of art and the world. But who is Em, and what does she want to become?

It's 2004. Em is now Emily, a successful book editor, happily married and barely coping with the challenges of a new baby. And suddenly Lucy and Emily return to her life: Her old friend Lucy's posthumous book needs a publisher, and her ex-friend Emily wants to rekindle their relationship. As they did once before, these two women—one dead, one very alive—force Emily to reckon with her decisions, her failures, and what kind of creative life she wants to lead.

A sharp, reflective, and funny story of a young woman coming into herself and struggling to find her place, Vintage Contemporaries is a novel about art, parenthood, loyalty, and fighting for a cause—the times we do the right thing, and the times we fail—set in New York City on both sides of the millennium.