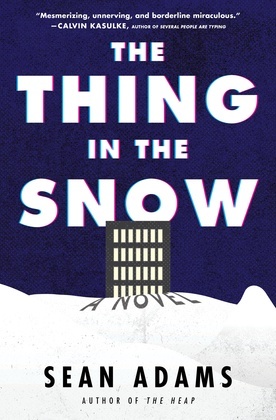 The Thing in the Snow

A Novel
by Sean Adams (Author)
Read sample online Download sample
Fiction Thrillers English literature American and Canadian literature
warning_amber
One or more licenses for this book have been acquired by your organisation details
EPUB
26 loans, One at a time
Details

From the critically acclaimed author of The Heap, a thought-provoking and wryly funny novel—equal parts satire and psychological thriller—that holds a funhouse mirror to the isolated workplace and an age of endless distraction.

At the far reaches of the world, the Northern Institute sits in a vast expanse of ice and snow. Once a thriving research facility, its operations were abruptly shut down after an unspecified incident, and its research teams promptly evacuated. Now it’s home to a team of three caretakers—Gibbs, Cline, and their supervisor, Hart—and a single remaining researcher named Gilroy, who is feverishly studying the sensation of coldness.

Their objective is simple: occupy the space, complete their weekly tasks, and keep the building in working order in case research ever resumes. (Also: never touch the thermostat. Also: never, ever go outside.) The work isn’t thrilling—test every door for excessive creaking, sit on every chair to ensure its structural integrity—but for Hart, it’s the opportunity of a lifetime, a chance to hone his leadership skills and become the beacon of efficiency he always knew he could be.

There’s just one obstacle standing in his way: a mysterious object that has appeared out in the snow. Gibbs and Cline are mesmerized. They can’t discern its exact shape and color, nor if it’s moving or fixed in place. But it is there. Isn’t it?

Whatever it might be, Hart thinks the thing in the snow is an unwelcome distraction, and probably a huge waste of time. Though, come to think of it, time itself has been a bit wonky lately. Weekends pass in a blur, and he can hardly tell day from night. Gravity seems less-than-reliable. The lights have been flickering weirdly, and he feels an odd thrumming sensation in his beard. Gibbs might be plotting to unseat him as supervisor, and Gilroy—well, what is he really doing anyway?

Perplexed and isolated—but most certainly not alone—Hart wrestles for control of his own psyche as the thing in the snow beguiles his team, upends their work, and challenges their every notion of what is normal.