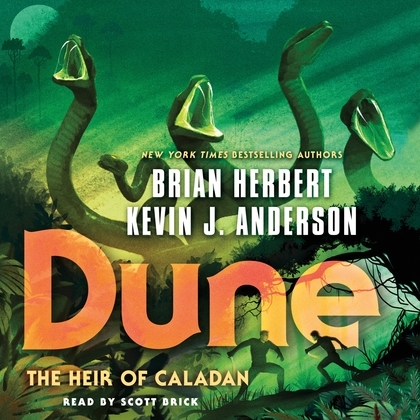 Dune: The Heir of Caladan

“Characters are imbued with heroic voices, delivering colorful cadences that catch the ear. Scenes are masterfully undergirded by mounting tension and sinister manipulation. . . . [Scott] Brick turns in a rewarding performance.” —AudioFile on Dune: The Duke of Caladan

In Dune: The Heir of Caladan, the climactic novel in the Caladan trilogy by New York Times bestselling authors Brian Herbert and Kevin J. Anderson, we step into the shoes of Paul Atreides. A not yet a man in years, he is about to enter a world he could never have imagined.

The story that began with Duke Leto Atreides's rise to power, then continued with the consequences of Lady Jessica’s betrayal, will now conclude with Paul becoming the leader that he needs to be on the way to his pivotal role as Muad’Dib.

Any Dune fan will devour this tale of a legend coming into his own.