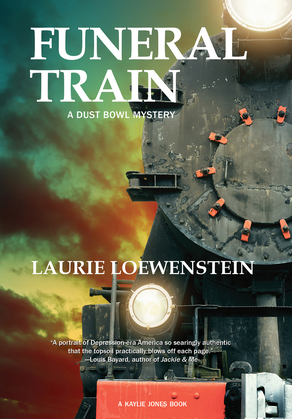 A Dust Bowl Mystery
by Laurie Loewenstein (Author)
Excerpt
Fiction Literary Mystery & detective Police procedural Historical
warning_amber
One or more licenses for this book have been acquired by your organisation details
EPUB
Unlimited loans, One at a time
Details

In her gripping follow-up to the widely acclaimed Dust Bowl Mystery Death of a Rainmaker, Laurie Loewenstein brings 1930s Oklahoma evocatively to life.

"Loewenstein handles the investigatory details well enough, but the book's richer rewards are its finely rendered portraits of small-town life under trying circumstances. She creates a vivid cast of gossips and cranks, loners and busy bodies. Some are lovable, some are not. All are connected to the secrets that lie just beneath the surface of the town's dusty streets."
—Washington Post, one of "Five New Thrillers to Kick Off Your Fall Reading"

Already suffering the privations of the 1930s Dust Bowl, an Oklahoma town is further devastated when a passenger train derails—flooding its hospital with the dead and maimed. Among the seriously wounded is Etha, wife of Sheriff Temple Jennings. Overwhelmed by worry for her, the sheriff must regain his footing to investigate the derailment, which rapidly develops into a case of sabotage.

The following night, a local recluse is murdered. Temple has a hunch that this death is connected to the train wreck. But as he dissects the victim’s life with help from the recuperating and resourceful Etha, he discovers a tangle of records that make a number of townsfolk suspects in the murder.

Temple’s investigations take place against the backdrop of the Great Depression—where bootlegging, petty extortion, courage, and bravado play out in equal measure.