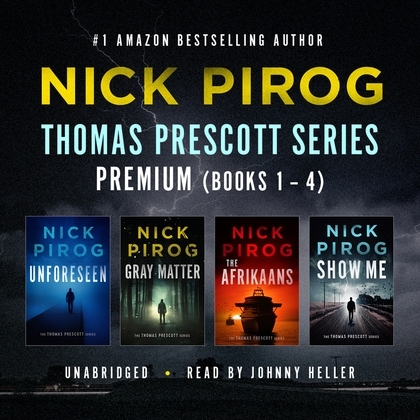 A complete crime fiction box set! Homicide detective Thomas Prescott may be retired—but a serial killer, a high-profile murder, an ill-fated cruise, and a chilling small-town crime add more than enough excitement to his hard-earned rest.

Retired homicide detective Thomas Prescott is reluctant to read the bestselling true-crime thriller, Eight in October. After all, it was his case, and he doesn’t need to be reminded of the gruesome details. The book dubbed the serial killer, Tristen Grayer—The MAINEiac. Grayer is allegedly dead, but only Prescott knows the truth: Grayer is alive and lurking in the shadows.

On October 1st, the anniversary of the first murder, The MAINEiac resurfaces, killing someone special from Prescott’s past. Suddenly, it’s déjà vu for Prescott, except this time the women closest to him begin to fall victim. With the help of his former flame, Bangor chief medical examiner, Dr. Caitlin Dodds, Prescott must race against the clock to stop Grayer from completing his encore.

His love life in shambles, retired homicide detective Thomas Prescott returns to Seattle, the very place he fled from after his parents’ deaths nearly a decade earlier. Just as Prescott is getting settled in, he sees a body floating in the private cove behind his boyhood home. It’s a woman. But not just any woman. It’s Ellen Gray—the governor of Washington—who has been missing for the past six weeks.

The lead suspect in the governor’s murder is her husband, famed defense attorney, Adam Gray. But unlike the Seattle Police Department—where Thomas was fired from several years earlier—Prescott has his doubts about Adam’s guilt. Ignoring direct orders to stay away from the case, Prescott soon finds himself drawn into the heart of the investigation.

Working side-by-side with SPD detective, Erica Frost, Prescott uncovers a sophisticated conspiracy linked to a new breed of killer. In his pursuit to catch a madman, Prescott’s investigation will take him from the state capital to the snow-covered peaks of the North Cascades and for the first time in his career, Thomas finds himself both the hunter…and the hunted.

Intimate in scale, but grandly outfitted, the luxury cruise liner The Afrikaans hosts no more than 208 pampered guests, among them; former FBI contract agent Thomas Prescott. When the ship is overtaken by African pirates who are demanding the U.S. send medical relief to a small Zulu village in South Africa, it’s up to Prescott to keep the hostages alive.

As the U.S. tries to figure out how to combat the terrorists’ plot from the outside, World Health Organization doctor, Gina Brady, undertakes the impossible task of rescuing three children from the secluded Zulu village. With the deadline drawing near, Prescott and Brady must race against the clock to discover the truth; is it medical relief the pirates seek or a two billion dollar ransom from one of the richest men in the world? Or could the implications be so profound, and the stakes so high, a war hangs in the balance…

When retired homicide detective Thomas Prescott learns he’s inherited a 250-acre farm in Tarrin, Missouri (pop. 2,100), he can’t get there fast enough. As he slowly acclimates to small town living, he hears rumblings about a horrific crime in the town’s past. Four years earlier, a recently fired employee of the local grocery store enacted his revenge, shooting and killing the owner of the store, plus four customers, then turning the gun on himself. The crime appears to have been solved, but Prescott has his doubts.

Balancing farm life and a budding romance with the town veterinarian, Prescott begins reinvestigating the crime. On the surface, the case is cut and dry—a revenge killing gone bad. But what if revenge wasn’t the motive? What if the store owner wasn’t the target? One by one, Prescott delves into the victims’ pasts. As Prescott digs deeper, he discovers the murders were twenty years in the making and soon finds himself in the unfamiliar waters of Big Biotech, GMOs, political payoffs, hired mercenaries, and the shadowy past of one of the most hated companies in the world.