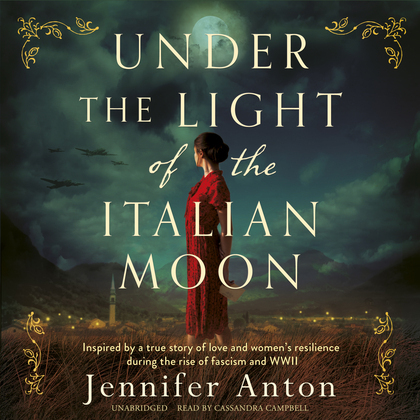 Under the Light of the Italian Moon

A promise keeps them apart until WWII threatens to destroy their love forever.

Nina Argenta doesn’t want the traditional life of a rural Italian woman. The daughter of a strong-willed midwife, she is determined to define her own destiny. But when her brother emigrates to America, she promises her mother to never leave. When childhood friend Pietro Pante briefly returns to their mountain town, passion between them ignites while Mussolini forces political tensions to rise.

Just as their romance deepens, Pietro must leave again for work in the coal mines of America. Nina is torn between joining him and her commitment to Italy and her mother. As Mussolini’s Fascists throw the country into chaos and Hitler’s Nazis terrorize their town, each day becomes a struggle to survive greater atrocities. A future with Pietro seems impossible when they lose contact and Nina’s dreams of a life together are threatened by Nazi occupation and an enemy she must face alone.