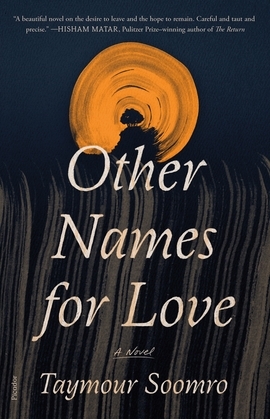 Other Names for Love

A Novel
by Taymour Soomro (Author)
Excerpt
Fiction LGBTQ+ Literary English literature
warning_amber
One or more licenses for this book have been acquired by your organisation details
EPUB
Unlimited loans, 2 years, One at a time
Details

A charged, hypnotic debut novel about a boy’s life-changing summer in rural Pakistan: a story of fathers, sons, and the consequences of desire.

At age sixteen, Fahad hopes to spend the summer with his mother in London. His father, Rafik, has other plans: hauling his son to Abad, the family’s feudal estate in upcountry, Pakistan. Rafik wants to toughen up his sensitive boy, to teach him about power, duty, family—to make him a man. He enlists Ali, a local teenager, in this project, hoping his presence will prove instructive.

Instead, over the course of one hot, indolent season, attraction blooms between the two boys, and Fahad finds himself seduced by the wildness of the land and its inhabitants: the people, who revere and revile his father in turn; cousin Mousey, who lives alone with a man he calls his manager; and most of all, Ali, who threatens to unearth all that is hidden.

Decades later, Fahad is living abroad when he receives a call from his mother summoning him home. His return will force him to face the past. Taymour Soomro’s Other Names for Love is a tale of masculinity, inheritance, and desire set against the backdrop of a country’s troubled history, told with uncommon urgency and beauty.