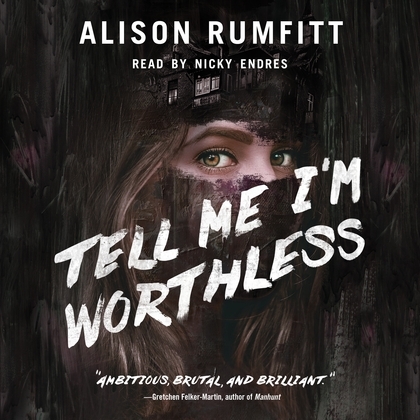 by Alison Rumfitt (Author), Nicky Endres (Narrateur)
Fiction Horror Occult & supernatural English literature British literature
warning_amber
One or more licenses for this book have been acquired by your organisation details
AUDIOBOOK
Unlimited loans, 2 years, One at a time
Details

Alison Rumfitt’s Tell Me I’m Worthless is a dark, unflinching haunted house story that confronts both supernatural and real-world horrors through the lens of the modern-day trans experience.

"Transfeminine actor Nicky Endres’ narration is chilling throughout, as they voice the perspectives of Alice, Ila, and the house at an easy, relaxed pace. Their voice maintains a lulling and melodious sing-song quality, which acts in opposition to the horrors portrayed in the book." - Booklist

Three years ago, Alice spent one night in an abandoned house with her friends, Ila and Hannah. Since then, Alice’s life has spiraled. She lives a haunted existence, selling videos of herself for money, going to parties she hates, drinking herself to sleep.

Memories of that night torment Alice, but when Ila asks her to return to the House, to go past the KEEP OUT sign and over the sick earth where teenagers dare each other to venture, Alice knows she must go.

Together, Alice and Ila must face the horrors that happened there, must pull themselves apart from the inside out, put their differences aside, and try to rescue Hannah, whom the House has chosen to make its own.

Cutting, disruptive, and darkly funny, Tell Me I’m Worthless is a vital work of trans fiction that examines the devastating effects of trauma and how fascism makes us destroy ourselves and each other.