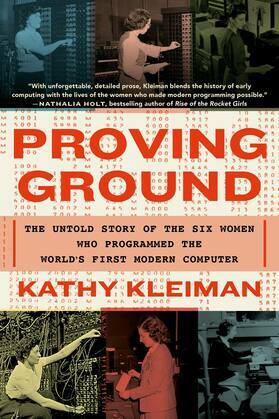 The Untold Story of the Six Women Who Programmed the World’s First Modern Computer
by Kathy Kleiman (Author)
Excerpt
Nonfiction Biography & autobiography Science & technology Women
warning_amber
One or more licenses for this book have been acquired by your organisation details
EPUB
Unlimited loans, 2 years, One at a time
Details

For fans of Code Girls and Hidden Figures, PROVING GROUND is the untold, WWII-era story of the six American women who programmed the world's first modern computer.


After the end of World War II, top-secret research continued across the United States, and scientists, mathematicians and programmers alike rushed to complete their confidential assignments before time ran out. Among them were six pioneering women, tasked with figuring out how to program the world’s first digital computer — a machine built to calculate a single ballistic trajectory in ten seconds rather than 40 hours by human hand — even though there was no manuals or coding language in existence. They battled against not only this difficult task, but also the men who sought to steal credit away from them. Because of these sexist efforts, they were soon lost to history.

These women are brought back to life, and back into the historical record, through the meticulous research and vivid prose of author Kathy Kleiman. For more than two decades, she pored over hours of broadcast-quality film, documentation, and images that had been relegated and dismissed by even computer history “experts,” who had assumed the women pictured were nothing more than models. PROVING GROUND is a character-driven narrative that restores these women to their rightful place as technological revolutionaries. As the tech world continues to struggle with gender imbalance and its far-reaching consequences, the story of the ENIAC programmers’ groundbreaking work is more urgently necessary than ever before.
Publication date
July 26, 2022
Publisher
Grand Central Publishing
Collection
Page count
432
ISBN
9781538718278
Paper ISBN
9781538718285
File size
35 MB
The publisher has not provided information about accessibility.
4653867
item