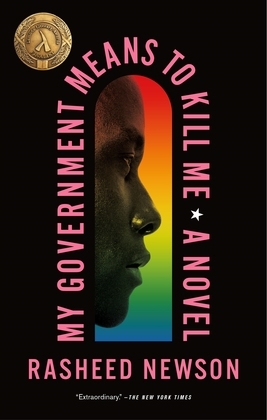 My Government Means to Kill Me

MOST ANTICIPATED BOOK OF 2022 by The New York Times, Bustle, Goodreads, The Boston Globe, LitHub, and more!

The debut novel from television WRITER/PRODUCER OF THE CHI, NARCOS, and BEL-AIR tells a fierce and riveting queer coming-of-age story following the personal and political awakening of a young, gay, Black man in 1980s New York City.

“Full of joy and righteous anger, sex and straight talk, brilliant storytelling and humor... A spectacularly researched Dickensian tale with vibrant characters and dozens of famous cameos, it is precisely the book we’ve needed for a long time.” —Andrew Sean Greer, Pulitzer Prize-winning author of Less

Earl "Trey" Singleton III arrives in New York City with only a few dollars in his pocket. Born into a wealthy Black Indianapolis family, at 17, he is ready to leave his overbearing parents and their expectations behind.

In the city, Trey meets up with a cast of characters that changes his life forever. He volunteers at a renegade home hospice for AIDS patients, and after being put to the test by gay rights activists, becomes a member of the AIDS Coalition to Unleash Power (ACT UP). Along the way Trey attempts to navigate past traumas and searches for ways to maintain familial relationships—all while seeking the meaning of life amid so much death.

Vibrant, humorous, and fraught with entanglements, Rasheed Newson’s My Government Means to Kill Me is an exhilarating, fast-paced coming-of-age story that lends itself to a larger discussion about what it means for a young gay Black man in the mid-1980s to come to terms with his role in the midst of a political and social reckoning.