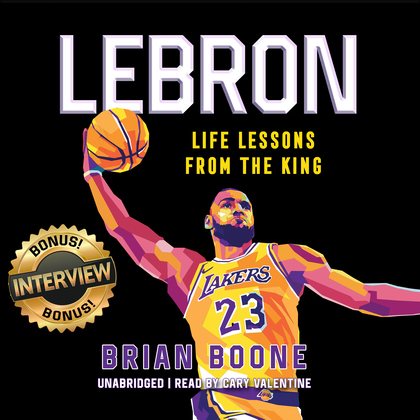 Life Lessons from the King
by Brian Boone (Author), Cary Valentine (Narrateur)
Excerpt
Nonfiction Biography & autobiography Sports Health & fitness Anxieties and stress Nature, recreation and sports Sports & recreation Basketball
warning_amber
One or more licenses for this book have been acquired by your organisation details
AUDIOBOOK
Unlimited loans, One at a time
Details

Secrets to success from one of the greatest basketball players of all time: LeBron James

“Nothing is given. Everything is earned.”

His power, speed, and killer instincts made him a basketball phenom, but it was blood, sweat, and determination that turned him into an undisputed champion. From the day Sports Illustrated deemed him “The Chosen One” when he was still in high school, LeBron James, a skinny kid from Akron, Ohio, rose to stardom for his world-class athleticism. Two decades, four NBA championships, three Olympic medals, four MVP awards, three teams, and eighteen All-Star selections later, LeBron is the reigning king of the NBA. The world watches in awe as he breaks countless records and sets jaw-dropping new ones. He has taken his success further than anyone imagined, proving himself a savvy investor and businessman, making a splash in the entertainment industry, and emerging as a powerful voice for social justice. LeBron: Life Lessons from The King offers courtside seats to the highs and lows of LeBron’s unbelievable journey and reveals valuable insights for anyone trying to make their own lofty dreams come true.

Motivating and empowering quotes from King James himself

A biographical look at LeBron’s early years, his rise to fame, and his most spectacular achievements