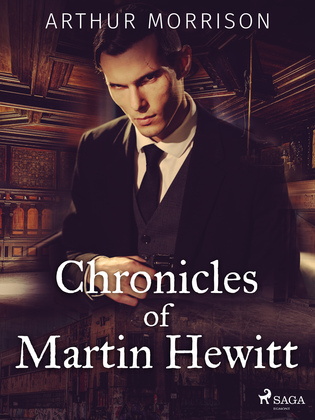 Narrated by Hewitt's great friend, journalist Colonel Brett, ‘The Chronicles of Martin Hewitt’ highlights one of the 19th Century's most popular detectives.

In these six short stories, written by Arthur Morrison, Hewitt is called in to solve crimes and mysteries that have Scotland Yard scratching its head. From missing gold to a missing memory, Hewitt must use all his sleuthing skills to put the pieces of the various puzzles together.

A must for fans of Conan Doyle's ‘Sherlock Holmes,’ and for anyone who likes their mysteries served up with a bit of class.


Born in London's East End, Arthur Morrison (1863 – 1945) was a journalist and author. He began work at the age of 16 as an office boy for the London School Boy. Later, he progressed to journalism, first as a clerk for the ‘People’s Palace’ newspaper, and then as an editor for the ‘Evening Globe.’

His first published piece was a poem, submitted to ‘Cycling’ magazine. Later, he would serialise many of his major works, such as ‘Tales of Mean Streets’ and ‘Child of the Jago’ in the ‘National Observer’.

Morrison's stories are characterised by his unflinching depictions of life in the East End. In addition, he wrote detective stories featuring the lawyer-cum-detective, Martin Hewitt. Hewitt was one of the 19th Century's most popular sleuths, only outshone by Conan Doyle's ‘Sherlock Holmes.’