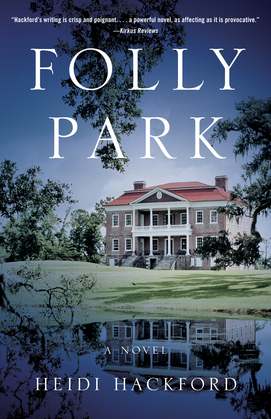 A Novel
by Heidi Hackford (Author)
Excerpt
Fiction Historical Christian Historical Contemporary women
warning_amber
One or more licenses for this book have been acquired by your organisation details
EPUB
Unlimited loans, One at a time
Details

Fans of Surviving Savannah by Patti Callahan, The Book of Lost Friends by Lisa Wingate, and Almost Sisters by Joshilyn Jackson will enjoy Folly Park.

Are we ever able to escape the past? Should we be allowed to?

Though deeply ashamed of her slaveholding heritage, Temple Preston’s sense of duty and bittersweet memories tie her to Folly Park, her family’s crumbling ancestral plantation in Virginia. Now a cash-strapped tourist attraction, Folly Park was once the home of Confederate General Thomas Temple Smith, a southern war hero who died under mysterious circumstances. Temple is pursuing a plan to secure the house museum’s future when her summer research assistant, a Black PhD student, uncovers a remarkable secret: the general’s wife gave birth to a biracial baby while he was away fighting in the Civil War. This discovery turns Temple’s quiet, insulated life upside down, and—along with further revelations about the past that come to light in the ensuing weeks—fuels the growing tension in her hometown as a Black activist and Temple’s own race-baiting brother square off in a local campaign for mayor. Faced with threats and betrayal, Temple discovers who she really is—and how much she’s willing to lose to tell the truth.