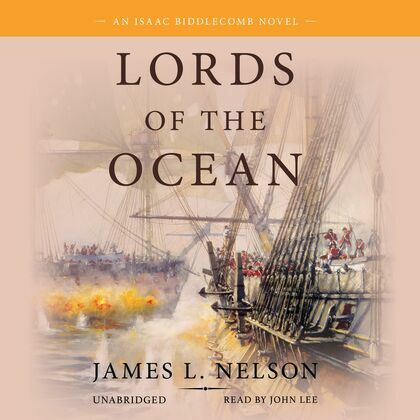 Lords of the Ocean

by James L. Nelson (Author), John Lee (Narrateur)
Excerpt
Fiction Action & adventure Historical
warning_amber
One or more licenses for this book have been acquired by your organisation details
AUDIOBOOK
Unlimited loans, One at a time
Details

James L. Nelson’s revolution at sea saga has brought to life a never-before-seen side of America’s war for independence. With his expertise of a seasoned mariner, a historian’s vivid attention to detail, and a natural gift for sensational storytelling, Lords of the Ocean carries us along on his bold and stirring course through history.

In the summer of 1776, a fleet of British transport ships is looming off Staten Island, while the remnants of General George Washington’s army huddle behind hastily constructed fortifications on Brooklyn Height. There, Washington is preparing for the final destruction of the Continental army.

Now Captain Isaac Biddlcomb receives a monumental order: to transport to France the most dangerous secret weapon in the country’s arsenal: scientist and philosopher Benjamin Franklin.

Biddlecomb’s seemingly simple mission to deliver Franklin to the court of Louis XVI is just the first volley in a grand scheme. While he is boldly raiding the English coast and Franklin is discussing strategy at Versailles, they both conspire to blow French neutrality out of the water—and turn the colonial uprising in to a full-scale war.