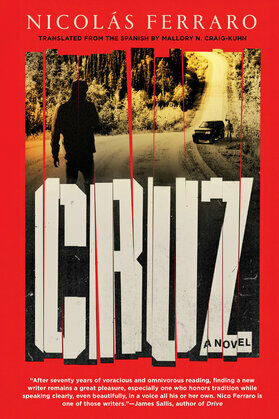 by Nicolás Ferraro (Author), Mallory N. Craig-Kuhn (Translator)
Excerpt
Fiction Mystery & detective Hard-boiled Hispanophone literature South American literature
warning_amber
One or more licenses for this book have been acquired by your organisation details
EPUB
Unlimited loans, One at a time
Details
EPUB
Unlimited loans, 1 years, One at a time
Details

Set in northern Argentina, the gorgeous and gruesome story of two brothers following in their criminal father’s footsteps in a bloody battle to save their family from drug lords, perfect for fans of Don Winslow and Narcos.

Tomás Cruz swore he would never be like his father, an abusive cocaine junkie whose gangland exploits are notorious throughout the underbelly of northern Argentina. When Samuel Cruz is sentenced to thirteen years in prison, he leaves a laundry list of unfinished cartel business. Seba, Tomás’s revered older brother, has no choice but to abandon his straight life and take over his father’s underworld debt.

Now fifteen years has passed, Seba has been arrested, and the ruthless cartel boss is holding his wife and daughter as collateral—just in time for the holidays. Tomás is forced to choose between protecting his family and his soul as he assumes the to-do list where Seba left off, plunging into the shocking depravity of the cartel to track a drug deal gone wrong. On a bloody quest for underworld justice that will take him from a nightmarish bar staffed by teenage sex slaves to the murky depths of the Paran River, Tomás discovers himself capable of violence he never thought possible. He must ask himself if he really is his father’s son . . . and he may not like the answer.

Argentinian noir wunderkind Nicolás Ferraro’s first novel to be translated into English, Cruz was a finalist for the prestigious Dashiell Hammett Award for Best Crime Novel.