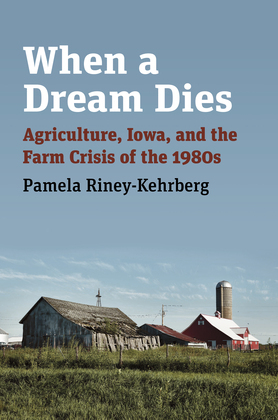 When a Dream Dies

Tucked into the files of Iowa State University’s Cooperative Extension Service is a small, innocuous looking pamphlet with the title Lenders: Working through the Farmer-Lender Crisis. Cooperative Extension Service intended this publication to improve bankers’ empathy and communication skills, especially when facing farmers showing “Suicide Warning Signs.” After all, they were working with individuals experiencing extreme economic distress, and each banker needed to learn to “be a good listener.” What was important, too, was what was left unsaid. Iowa State published this pamphlet in April of 1986. Just four months earlier, farmer Dale Burr of Lone Tree, Iowa, had killed his wife, and then walked into the Hills Bank and Trust company and shot a banker to death in the lobby before taking shots at neighbors, killing one of them, and then killing himself. The unwritten subtext of this little pamphlet was “beware.” If bankers failed to adapt to changing circumstances, the next desperate farmer might be shooting.

This was Iowa in the 1980s. The state was at the epicenter of a nationwide agricultural collapse unmatched since the Great Depression. In When a Dream Dies, Pamela Riney-Kehrberg examines the lives of ordinary Iowa farmers during this period, as the Midwest experienced the worst of the crisis. While farms failed and banks foreclosed, rural and small-town Iowans watched and suffered, struggling to find effective ways to cope with the crisis. If families and communities were to endure, they would have to think about themselves, their farms, and their futures in new ways. For many Iowan families, this meant restructuring their lives or moving away from agriculture completely. This book helps to explain how this disaster changed children, families, communities, and the development of the nation’s heartland in the late twentieth century.

Agricultural crises are not just events that affect farms. When a Dream Dies explores the Farm Crisis of the 1980s from the perspective of the two-thirds of the state’s agricultural population seriously affected by a farm debt crisis that rapidly spiraled out of their control. Riney-Kehrberg treats the Farm Crisis as a family event while examining the impact of the crisis on mental health and food insecurity and discussing the long-term implications of the crisis for the shape and function of agriculture.