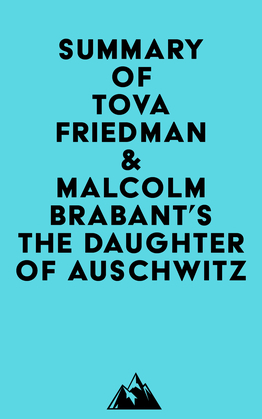 Summary of Tova Friedman & Malcolm Brabant's The Daughter of Auschwitz

by   Everest Media (Author)
Excerpt
Nonfiction History
warning_amber
One or more licenses for this book have been acquired by your organisation details
EPUB
55 loans, One at a time
Details
EPUB
40 loans, 10 Concurrent loans
Details

Please note: This is a companion version & not the original book.

#1 The block elder, a woman in charge of the block, was Jewish. She was given extra food by the Nazis in return for carrying out their orders. I was afraid of her, but without her, there was chaos.

#2 One day, I was with the other children in the barracks when a woman I didn’t recognize came in. She was emaciated, and her features were distorted by malnutrition. But it was my mama. She told me that the Nazis were rounding up people to walk to Germany. Maybe you will make it. You might survive the march. But this is not a world for children. I don’t want you to survive alone.

#3 I had always lived in a world where being Jewish meant you were destined to die. I had never known freedom, and my survival depended on my ability to judge the mood of my captors.

#4 I was terrified of the German shepherds, and their handlers, who were bigger than I was. I never looked in the eyes of the SS, the elite military corps that were made up of the most fanatical Nazis.