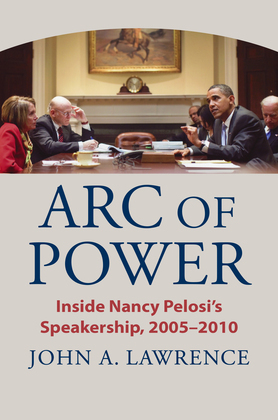 Inside Nancy Pelosi's Speakership, 2005–2010
by John A. Lawrence (Author)
Excerpt
Nonfiction Biography & autobiography Political Presidents & heads of State Social science Political science Government Legislative branch
warning_amber
One or more licenses for this book have been acquired by your organisation details
EPUB
Unlimited loans, One at a time
Details

Drawing from his thousands of pages of notes written while serving as Chief of Staff to Speaker of the House Nancy Pelosi, John Lawrence has written a narrative documenting his insider perspective from 2005 to 2010. These momentous years included furious political and legislative battles over the wars in Afghanistan and Iraq, the economic recession, the 2008 presidential election, the productive first two years of Barack Obama’s presidency, as well as many key legislative products, such as the Troubled Assets Relief Program, the Affordable Care Act, and Wall Street reform.

Lawrence’s unique observations provide an unparalleled look at the interpersonal relationships of major political leaders and institutions and give readers a first-hand perspective of this significant period in political history. Utilizing more than 9,000 pages of transcribed notes from hundreds of conversations between top congressional and administration officials, readers can enter the room and experience the discussions of the key participants in real time.

Arc of Power provides a valuable account of the strategies, machinations, and challenges of congressional leaders as they gain, exercise, and lose power. Utilizing the voices of the men and women involved in the often—but not always—partisan clashes, this book examines the role of personalities, factions, parties, and political institutions in the formulation of national policy on key issues. Lawrence artfully demonstrates the challenges presented by intraparty factional disagreements when writing complex legislation and illustrates the institutional tensions between the House and Senate, and Congress and the White House, when the government is unified under one party or divided.

Lawrence offers valuable insights into the differing and often conflicting role played by the House and Senate given their design and composition, and shows how even a House led by powerful individuals is frequently undercut by the Senate, and how that weakness especially impacts the political power of minority populations.