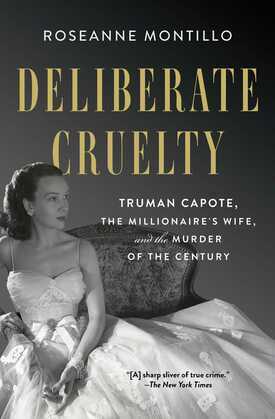 Truman Capote, the Millionaire's Wife, and the Murder of the Century
by Roseanne Montillo (Author)
Excerpt
Nonfiction Biography & autobiography Literary History History by country United States News and investigations True crime
warning_amber
One or more licenses for this book have been acquired by your organisation details
EPUB
Unlimited loans, 2 years, One at a time
Details

This glittering, “wild romp of a story, boldly and beautifully told” (Neal Thompson, author of The First Kennedys) explores the darkly intertwined fates of infamous socialite Ann Woodward and literary icon Truman Capote, sweeping us to the upper echelons of Manhattan’s high society—where falls from grace are all the more shocking.

When Ann Woodward shot her husband, banking heir Billy Woodward, in the middle of the night in 1955, her life changed forever. Though she claimed she thought he was a prowler, few believed the woman who had risen from charismatic showgirl to popular socialite. Everyone had something to say about the scorching scandal afflicting one of the most rich and famous families of New York City, but no one was more obsessed with the tale than Truman Capote.

Acclaimed for his bestselling nonfiction book In Cold Blood, Capote was looking for new material and followed the scandal from beginning to end. Like Ann, he too had ascended from nobody to toast of the town, but he always felt like an outsider, even among the exclusive coterie of high society women who adored him. He decided the story of Ann’s turbulent marriage would be the basis of his masterpiece—a novel about the dysfunction and sordid secrets revealed to him by his high society “swans”—never thinking that it would eventually lead to Ann’s suicide and his own scandalous downfall.

“A 20th-century morality tale of enduring fascination” (Laura Thompson, author of The Heiresses), Deliberate Cruelty is a haunting cross between true crime and literary history that is perfect for fans of Furious Hours, Empty Mansions, and Midnight in the Garden of Good and Evil.