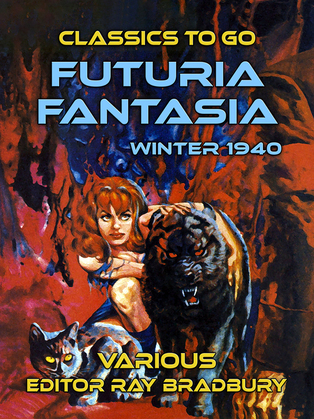 Excerpt: "THIS ISSUE; J. Harvey Haggard bows into what we hope will be a regular spotlight in Futuria Fantasia.... Emil Petaja, whose verses have appeared in Weird Tales, makes his self known with a neat little weird yarn and a poem.... Again H.V.B. comes to the fore with a sequel to THE GALAPURRED FORSENDYKE—THE VOICE OF SCARILIOP ... and, in case you have wondered about or will wonder about these two unusual yarns, we are printing them for no other reason than that we like their description, they tickle our mental palate, they are word pictures of surrealistic dreams ... and anyone who guesses who H.V.B is will get the next edition of Futuria Fantasia gratis.... Henry Hasse blows in and blows up with a rebuttle against Foo E. Onya and does himself right proud by science-fiction.... Ross Rocklynne, prominent Eastern schlameel, offers us a pitiful excuse for an article, HOW TO GET ABOUT.... Ron Reynolds, we have no doubt, will manage to get into the magazine somehow with his horrendous FIGHT OF THE GOOD SHIP CLARISSA, but if we can do anything at all we'll print it on invisible paper.... Anthony Corvais, if you start guessing who did it, wrote the short story in the rear by the title of THE SYMPHONIC ABDUCTION.... Hannes Bok, who has another cover on Weird Tales for March, has drawn our cover again and many inside illustrations, including a large advertisement for Hell, under which you will find a descriptive poem written by Guy Amory. Unlike Finlay, who draws pictures from poems, we procure pictures from Bok and write poems about them. In fact, I blushingly admit, I even wrote a ten thousand word novelette around that little creature on the cover of the first Futuria Fantasia ... which, no doubt, will have its share of rejections very soon, in which case I will foist on my poor unsuspecting public, both of them, this story now titled LORELEI. I would have included it in this issue, but Russell J. Hodgkins threatened me so venemously that I gave in told him to put down his gun. It might be a good idea, by the way, if more of you readers wrote us letters criticizing FuFa. So far we have heard nothing from Madle, Baltadonis, E.E. Smith, Kuslan, Marconette, Taurasi, Dikty, Wilson, or Speer. How in hell, we ask you guys, can we improve if you won't write in and tell us if and why we stink? Co-operation, please...."