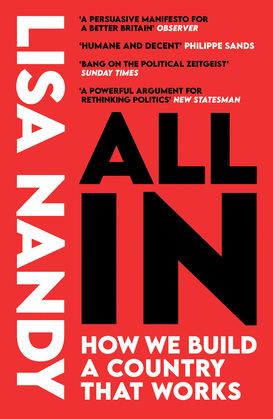 How we build a country that works
by Lisa Nandy (Author)
Excerpt
Nonfiction Biography & autobiography Personal memoirs Business & economics Economics Social science Political science Political process
warning_amber
One or more licenses for this book have been acquired by your organisation details
EPUB
26 loans, One at a time
Details

‘A persuasive manifesto for a better Britain.’ Observer Book of the Day

Britain is in crisis. This timely book by one of the stars of frontline politics shows a way out.

In this brilliant and accessible intervention, Lisa Nandy reveals how Britain can leave behind the mess in which we find ourselves. All In charts a course towards a fairer, more equal, more prosperous country by drawing on the greatest asset we have – each other.

Rapid global changes, political division and economic crisis have left Britain reeling. For decades, large swathes of the country have been shut out, condemned to low productivity, underinvestment and managed decline, and stripped of their voice. With most major cities now beset with high housing costs, air pollution and congestion, even the ‘winners’ are losing.

All In shows how, by handing power and resources to people with a stake in the outcome, Britain can draw on the talent, assets and potential in every part of the country and start firing on all cylinders again. Finding strength rather than fear in our differences, it reimagines the relationship between people and government so that all of us can play our part in meeting the challenges of our age and rebuilding Britain the only way that works – together.

Lucid, clear-eyed and hopeful, this book sets out how we restore values, energy and direction to our politics and offers a glimpse of the alternative future that remains within our grasp.