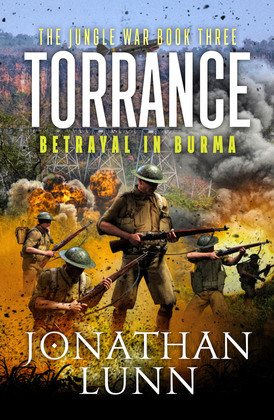 by Jonathan Lunn (Author)
Excerpt
Fiction Thrillers
warning_amber
One or more licenses for this book have been acquired by your organisation details
EPUB
Unlimited loans, One at a time
Details

Save their lives, but trust no one… Torrance is back and fighting for his life.

Burma, 1942: In the face of a relentless Japanese advance, the British Army is in headlong retreat.

Given command of a squad of defaulters, Corporal Charlie Torrance is tasked with escorting a notorious political prisoner to captivity in India. But a Japanese intelligence agent has joined forces with Burmese independence fighters intent on rescuing their comrade.

As the British Empire crumbles, Torrance will be forced to question everything he’s fighting for when he makes a bloody last stand in the sultry Burmese jungle.

Inspired by actual events, Torrance: Betrayal in Burma is a blistering adventure in the best traditions of Alistair MacLean and Bernard Cornwell.