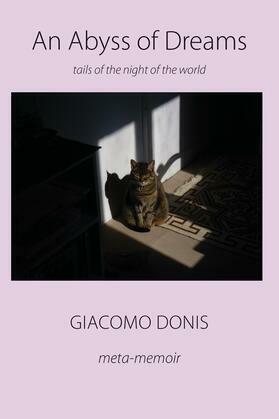 An Abyss of Dreams

by Giacomo Donis (Author)
Excerpt
Nonfiction Biography & autobiography Literary Fiction Literary Human science Philosophy Aesthetics
warning_amber
One or more licenses for this book have been acquired by your organisation details
EPUB
Unlimited loans, One at a time
Details

Meta-memoir, 'after' memoir. Aristotle's Meta-physics comes 'after' his Physics. 'An Abyss of Dreams' is a 'meta' book, an 'after' book. A dream itself has no 'before' but only a 'present,' which in consciousness is already an 'after.' This is the author's 'dream book': he recounts, vividly, his real nighttime dreams, of the night before, and of years and decades before. His two cats tell their tales, chasing their tails, 'after' their lives and their deaths. His protagonists: Pound, Artaud, Conrad; Hegel, his logic, philosophy of spirit, and 'anthropology'; Aristotle; and Freud. And Plato, (affectionately) accused of being the father of contemporary totalitarianism. This Abyss originates in Hegel's lines on the 'night of the world,' the 'terrible,' the nocturnal abyss of conscious life, pure self, 'the interior of nature,' where 'suddenly a bloody head darts out and just as suddenly vanishes.' Meanwhile, for Freud, 'old eel,' dreams are wish fulfillment. What! asks the author, in 'Why Dream?',  the first of the two novellas in this volume. Wish fulfillment? Then why do I only have nightmares? I only dream what I do not wish for! Why, Siggy, why? Why dream? Aristotle is next, with his schoolmate at Plato's Academy, Eudemus, known to us only for his (relatively) famous dream, and for Aristotle's lost dialogue dedicated to him, 'On the Soul.' Eudemus, our real hero. Who, unlike Aristotle, was to be famous only for his dream, celebrated, and fatally distorted, by Platonists, forever. But, we dream, not by Aristotle, forever tormented by the dream itself and, especially, by its totalitarian distortion. This is the premise of the second novella, 'I Dream of Eudemus': Eudemus, 'psyche iatros,' dreamed as the first 'soul doctor' in history. The first, and already a rebel: no drugs, no! 'Abyss therapy.' Dreams have long afterlives: 'An Abyss of Dreams' is 'meta'-memoir. With its cats, and its dreams, we travel through the entire history of psychiatry, from ancient Greece to present-day Venice. Where, dressed in a moon suit, Eudemus visits the author's great friend, and psychiatrist, in Intensive Care, in the Venice hospital. Chasing their tails, author and Eudemus together see, for themselves, reaching out from the eyes of their friend, the beginning, and the end, of the soul: the night of the world.