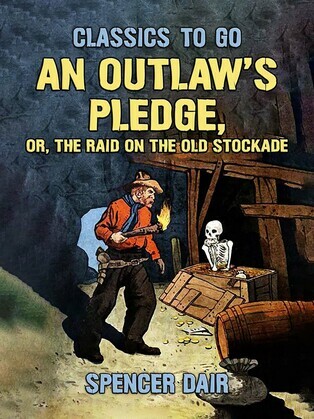 An Outlaw's Pledge, or, The Raid On The Old Stockade

Excerpt: ""His-s-t!" With startling suddenness, the cry shattered the stillness of the night that lay upon the foothills of the "Bad Lands." As they heard it, three men who, rolled in their army blankets, were sleeping in the protecting shadow of a huge boulder, rose to their elbows and peered into the darkness, at the same time whipping out their "Colts" with their free hands. But only the silence of the night, seeming more intense as the echo of the strident cry died away, greeted them. "That must have been a signal," breathed one of the trio, after several minutes of listening. "If it was a signal, it would have been answered," rejoined a companion. "Sure it would," asserted the third member of the party. "Then what was it?" demanded the first. "May have been a snake, or a mountain lion," suggested the man who had doubted the startling cry being a signal. "Snake? Mountain lion?" repeated the other, in disgust. "Say, you'd better go back to the recruits till you learn the difference between a human voice and an animal's cry." The three men were members of the Mounted Scouts, out on patrol duty from their station at Fort Griswold. Two of them had been in the service three years, while the other was on his first detail, having only just been promoted from the band of recruits at the Fort. Consequently, the sneering allusion to his inexperience cut deep, and he was about to retort fiercely, when the third scout prevented. "Jennings is right, Scotty. It was a man's voice uttered that cry," he whispered. "Then what does it mean?" persisted the youngster. "Just keep yer tongue in yer head and yer eyes and ears open, and we may find out," grunted Jennings. This reply had the intended result of effectually silencing the recruit, and, with every sense alert, the three men awaited some sound that would explain the mysterious signal."