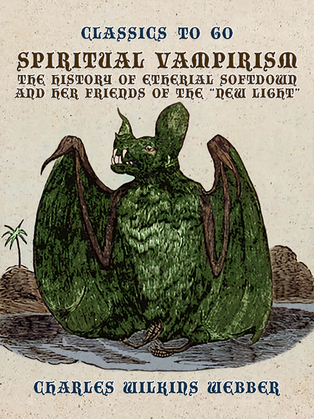 Spiritual Vampirism, The History of Etherial Softdown, and Her Friends of the "New Light"

Excerpt: "“The author, being a resident of New York during the period of the leading incidents narrated as occurring in that city, had formed the acquaintance of the principal personage. Himself a Southerner, he had, from the natural affinities of origin, inevitably been attracted toward Carter. The intercourse between them, at first reserved, had imperceptibly warmed into a degree of intimacy, which, however, had by no means been such as to render him at all cognisant, beyond the merest generalities, of the progress of his private affairs. He was not a little surprised, therefore, at finding, one day, an elegant escritoire or cabinet, of dark, rich wood, heavily banded in the old-fashioned style with silver, which had been placed, in his absence, on the table of his sanctum. A note, in a sealed envelope, lay upon it. He instantly recognised the handwriting of the address as that of Mr. Carter, and broke the seal."