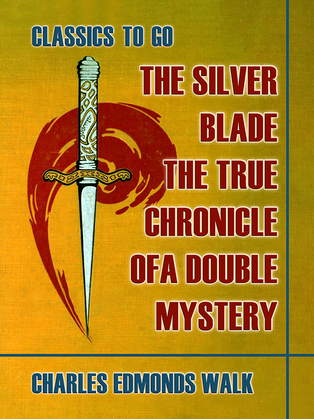 The Silver Blade, The True Chronicle of A Double Mystery

Excerpt: "About six o'clock on an evening in the early part of a recent November, the drowsy quiet sometimes pervading police headquarters was rudely broken by the precipitate entrance of a young man, who made his way hurriedly to the door marked, in neat gilt letters, "CHIEF OF POLICE." In addition to the reserve squad, whose vigil never ends, many other officers were present in the lazy transition stage between going on and going off duty. The attention of them all was immediately attracted to the stranger, and held by his extraordinary manner, from the instant he became visible in the flickering gas-lights until he finally disappeared. In the first place, he was not such a one as usually comes to the city-hall basement, either voluntarily or when haled hither by one of the law's myrmidons; for he was fashionably, even fastidiously, attired, with a marked preciosity of manner which would have been even more noticeable under ordinary conditions. But it was not over any idiosyncrasy of apparel or customary detail of personality that the aroused curiosity of the officers lingered. Inured as they were to uncommon and surprising events, they were nevertheless startled by this young man's advent, and greatly interested in his extreme discomposure. It was obvious to the most casual glance that he was the victim of a fright so potent that it possessed him to the complete exclusion of every other feeling, made him oblivious of the scrutiny to which he was subjected, and drove him blindly to the commission of some idea fixed by the terror which mastered him. And there was one other still more powerful emotion depicted in his pallid, twitching countenance: a horror unspeakable."