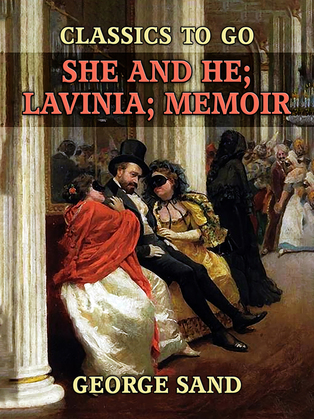 She and He, Lavinia, Memoir

Excerpt: "There is a natural desire to know something of the parentage and birth of renowned authors, and to learn something that may throw light on the formative influences which have operated in producing the works that have rendered them famous. In the case of George Sand, whose nature offers contrasts as striking as were the social conditions of her parents, this desire is particularly strong; therefore, although the limits prescribed to this sketch prevent either an exhaustive review of her life being undertaken, or a psychological study being entered upon, such details may be given as will prove useful and not without interest to readers of this famous writer. Amandine Lucille Aurore Dupin, who adopted the literary name of George Sand, was born in Paris on July 5, 1804. Her father, Maurice Dupin de Francueil, was of aristocratic birth, being the son of Monsieur Dupin de Francueil and Marie Aurore de Saxe, daughter of Marshal Saxe, a natural son of Augustus II, Elector of Saxony, who was allied to the Bourbons by the marriage of his sister to the Dauphin, the father of Louis XVI. Marie Aurore de Saxe, previous to her marriage with Monsieur Dupin de Francueil, had been the wife of Comte de Horn, a natural son of Louis XV. The author's mother, Antoinette Victoire Sophie Delaborde, was the daughter of a bird-fancier in Paris. These facts concerning her parentage show the association of the aristocratic with the plebeian in the blood of the author."