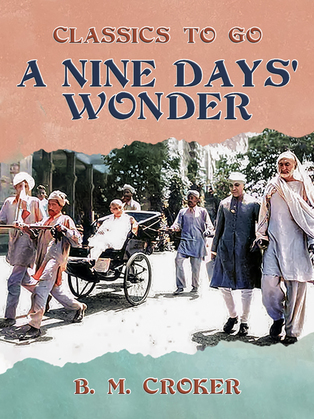 Excerpt: "A Tall grey-haired soldier, with a professionally straight back, stood looking out of an upper window in the "Rag" one wet October afternoon. His hands were buried in his pockets, and his face was clothed with an expression of almost mediaeval gloom. The worldly wise mask their emotions so that those who run may not read, but Colonel Doran had lived so many years among a primitive race that he made no effort to conceal his feelings, and all the world was welcome to see that he was bored to death. To tell the truth, he had been too long in the East to appreciate club life. Other men were undoubtedly contented, interested, occupied; it was different in his case. The palatial dignity, solemnity, luxury of the place failed to stir his pride; even its traditions left him as cold as the marble statue on the great staircase. He would have felt ten times more at home in a Bombay chair, on a brick verandah, with the old Pioneer in his hands and a "Trichy" in his mouth."