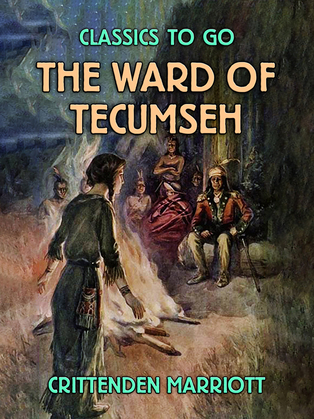 The Ward of Tecumseh

Excerpt: "When the beautiful Sally Habersham accepted Dick Ogilvie her girl associates rejoiced quite as much as she did, foreseeing the return to their orbits of sundry temporarily diverted masculine satellites. Her mother’s friends did not exactly rejoice, for Dick Ogilvie had been a great “catch” and his capture was a sad loss, but they certainly sighed with relief; for they had always felt that Sally Habersham was altogether too charming to be left at large. About the only mourners were a score or so of young men, whose hearts sank like lead when they heard the news. The young men took the blow variedly, each according to his nature. One or two made such a vehement pretense of not caring that everybody decided that they cared a great deal; two or three laughed at themselves in the vain hope of preventing other people from laughing at them; several got very drunk, as a gentleman might do without disgrace in that year of 1812; others hurriedly set off to join the army of thirty-five thousand men that Congress had just authorized in preparation for the coming war with Great Britain; the rest stayed home and moped, unable to tear themselves away from the scene of their discomfiture. Of them all none took the blow harder than Jaqueline Telfair, commonly known as Jack. Jack was just twenty-one, and the fact that he was a full year younger than Miss Habersham, had lain like a blight over the whole course of his wooing. In any other part of the land he might have concealed his lack of years, for he was unusually tall and broad and strong, but he could not do so at his home in Alabama, where everybody had known everything about everybody for two hundred years and more. Still, Jack hoped against hope and refused to believe the news until he received it from Miss Habersham’s own lips Miss Habersham, by the way, was not quite so composed as she tried to be when she told him. Jack was so big and fine and looked at her so straight and, altogether, was such a lovable boy that her heart throbbed most unaccountably and before she quite knew what she was doing she had leaned forward and kissed him on the lips. “Good-by, Jack, dear,” she said softly. Then, while Jack stood petrified, she turned and fled. She did not love Jack in the least and she did love Dick Ogilvie, but—Oh! well! Jack was a gentleman; he would understand. Jack did understand. For a few seconds he stood quite still; then he too walked away, white faced and silent."