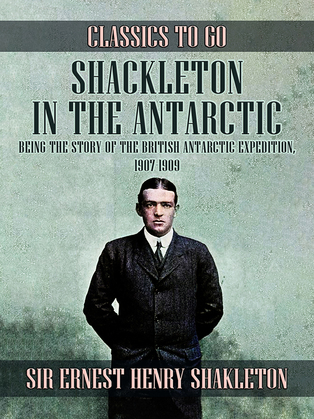 Shackleton in the Antarctic, Being the Story of the British Antarctic Expedition, 1907 - 1909

Excerpt: "Men go out into the void spaces of the world for various reasons. Some are incited simply by a love of adventure, some have a keen thirst for scientific knowledge, and others are drawn away from trodden paths by the mysterious fascination of the unknown. I think that in my own case it was a combination of these factors that determined me to try my fortune once again in the frozen south. I had been invalided home before the conclusion of the Discovery expedition, and I had the keenest desire to see more of the vast continent that lies amid the Antarctic snows and glaciers. Indeed the stark polar lands grip the hearts of men who have lived on them in a manner that can hardly be understood by people who have never got outside the pale of civilisation. I was convinced, moreover, that an expedition on the lines I had in view could justify itself by the results of its scientific work. The Discovery expedition had performed splendid service in several important branches of science, and I believed that a second expedition could carry the work still further. For instance, the southern limits of the Great Ice Barrier had not been defined, and it was important to the scientific world that information should be gained regarding the movement of the ice-sheet that forms the barrier. I also wanted to discover what lay beyond the mountains to the south of latitude 82° 17′ and whether the Antarctic continent rose to a plateau similar to the one found by Captain Scott beyond the western mountains. There was much also to be done in the fields of meteorology, zoology, biology, mineralogy and general geology, so much in fact that apart from the wish to gain a higher latitude the expedition seemed to be justified on scientific grounds alone. The difficulty that confronts most men who wish to undertake exploration work is that of finance, and for some time I was faced by financial problems; but when the governments of Australia and New Zealand came to my assistance, the position became more satisfactory."