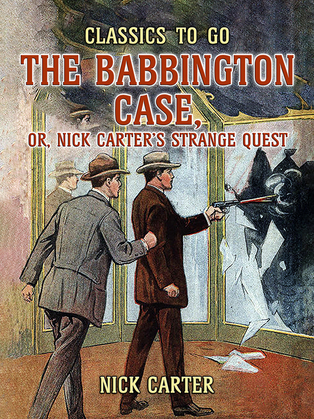 Excerpt: “A man and a woman together; then a man alone.” Nick Carter thought this remark rather than uttered it in words, as he came to an abrupt pause in his walk and looked down upon the tracks in the snow. There were no other tracks than those anywhere visible, save only his own, which he had made in his approach to the spot, and he was careful not to approach too near while he made the examination which only his curiosity suggested—for there could have been no other reason at the moment than curiosity to attract him. But before him was a huge iron gate between two enormous posts; a gate which had the outward appearance of not having been opened in a long time, and, indeed, upon it now, as the detective looked at it, there was a formidable padlock, with its heavy chain, to hold the great barrier against all comers. Nick Carter could see from where he stood that the lock was securely locked, that the chain had been drawn tightly around the spindles of the iron gate, and, therefore, that the man who had come out of the place alone, after having passed inside with the woman not very long before, had locked it. There were the tracks he had made when he had turned about to fasten the gate when he came out alone, and there were his tracks when he walked away from the place. But where was the woman? and why had she not come again with the man? These were perfectly natural questions which the detective asked himself; natural, because he knew something about the grounds upon which those gates opened, and also something about the house within those grounds. Still more, he knew something about the people to whom the magnificent residence and grounds belonged."