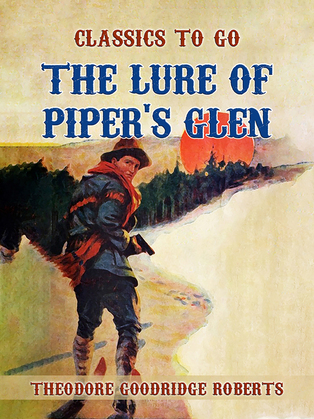 The Lure of Piper's Glen

Excerpt: "When the bottoms drop out of the logging-roads, the crews leave the camps about the headwaters of Racket River and return to their scattered homes, leaving the winter's cut on the "brows." A few weeks later, when all the melted snow of the hills is rushing along the watercourses, lifting and bursting the rotted ice, and the piles of brown logs on the steep banks go rolling and thundering down into roaring waters, the more active and daring of the workers return to duty with the harassed timber. Now they wear well-greased boots instead of oily shoepacks and larrigans—boots with high tops strapped securely around the leg, and strong heels and thick soles. In the sole and heel of each boot are fixed fifty caulks or short steel spikes—a hundred teeth for every "stream-driver" to bite a foothold with into running logs. The task of keeping the "drive" moving down the swirling and tortuous channel of the upper reaches of Racket River calls for skill and agility and strength and hardihood, and frequently for a high degree of stark physical courage. The water is as cold as the sodden ice which still drifts upon it, crushed and churned by the grinding logs. It sloshes high along the wooded banks, tearing tangles of alders out by the roots and undermining old cedars until they totter and fall and swirl away on the flood. To plunge hip-deep into that torrent to clear some log caught broadside to the rush by snag or tree or rock, calls for hardihood of spirit and an iron constitution. Where one log catches and is permitted to remain stationary, others catch, pile up, plunge and rear and dive, filling the channel to its rocky bed and blocking it from bank to bank with criss-crossed timber. The mad river, crowned with more logs and ice, strikes and recoils and backs up behind the jamb: spray flies over it; clear water spouts from it; the twisted timbers heave and groan and splinter. To go out on to such a barrier as this, and find and free the key-logs with a peavy, calls for all the qualities of a seasoned riverman and the courage of a veteran soldier into the bargain."