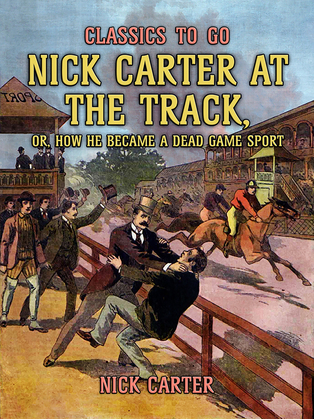 Nick Carter at the Track, or, How He Became A Dead Game Sport

Excerpt: "“And so, you see, I stand to lose twenty thousand dollars.” “That’s a large sum.” “Yes, Mr. Carter, it’s a large sum; but a middle-aged gentleman like yourself ought to be aware that risks are sometimes forced upon people who handle money in large sums.” The celebrated detective smiled as he looked into the excited countenance of the Wall Street man before him. Half an hour before, if the broker had seen him at all, he would hardly have referred to him as “a middle-aged business man.” The detective had just returned from an expedition to the upper part of the city, during which he had appeared as a verdant country boy of an inquiring turn of mind. “Of course,” the detective said, slowly, “people who handle money for the profit of others are expected to keep it in motion—honestly in motion.” He glanced keenly into his visitor’s face as he emphasized the last three words. “My case is hardly what you suppose it to be,” said Mr. James Wheeler, broker. “The money I handle belongs to two heirs—both minors. With that, however, you have nothing to do.” “You’re mistaken,” said Nick Carter, coldly. “If I am to handle your case I must have your fullest confidence.”"